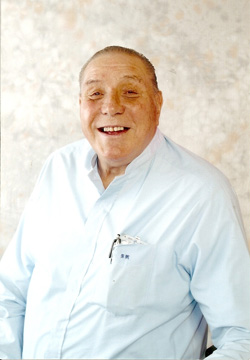 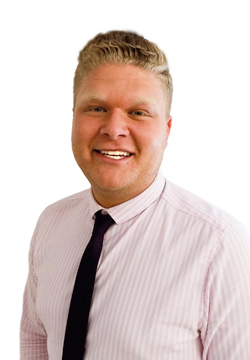 Sam BanksAssociate Director
Sam, our Associate Director with an edge! Sam has been a part of the hotel since the tender age of 14 in various capacities. With his 6’6 height, he is instantly recognisable around the building and is always on hand to assist our guests and staff alike with a warm smile (unless perhaps if it’s early morning – he only comes to life around midday.) Having studied Hospitality & Marketing, Sam is always ensuring De Rougemont is continually growing and improving. When he isn’t working, he loves a night out with friends, or jetting off on holiday – with a few sunbeds in-between! 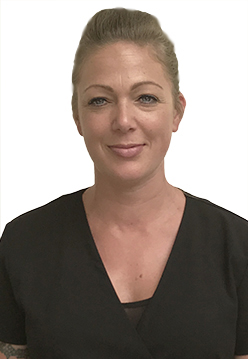 Sara Broadbridge Assistant Hotel Manager
Sara has been with us since 2016 and became our Assistant Hotel Manager in 2018. She doesn’t get much time to herself but when she does she loves to get away and chase the sun (she says she’s not made for this country as she’s always cold), her favourite place in the world is Greece and she plans to visit all the islands one day and eat as much Greek food as humanly possible. Any other free time she spends with her husband, 3 sons or childhood friends, a day out with her Mum & Niece or a takeaway night with friends is her perfect way to relax. 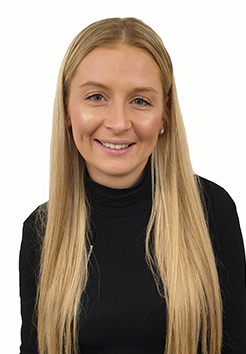 Nancy LebeauFront of House Manager
Nancy is our Front of House Manager. She started her working life as an apprentice in a 5* hotel in London and came to the De Rougemont family as Reception Manager after wanting to be closer to home. Now in her role as Front of House manager she aims to promote greater communication across the hotel departments and get us organised behind the scenes! When not at work Nancy loves hanging out at home with her Boston Terrier Vinnie, watching a good crime drama or the Game of Thrones series. Her idea of the perfect holiday is enjoying the white sands and turquoise waters of Bora Bora with a Piña Colada in hand and some 90’s pop in her headphones. 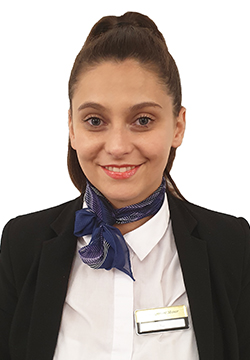 Tiziana MariniReception & Reservations Manager
Tiziana (Tizi) is originally from Lake Guarda in Italy, she tells us it’s very hot there and she often misses that lovely weather living in the UK where it’s so unpredictable! She came over by herself to study and gain some work experience, the plan to stay 6 months has ended up becoming 6 years (and counting!). She’s always worked on Reception and was the manager at her last hotel for 3 years, so we know she’s perfect for the job! On her days off you might find Tizi enjoying a Costa Coffee with a magazine, catching up on some Netflix series with her boyfriend or even planning her next trip back to Italy to visit family. Her favourite food in the world is pasta because it reminds her of home and her favourite place in the world is Sardinia where she has visited 3 times and can’t wait to go again! 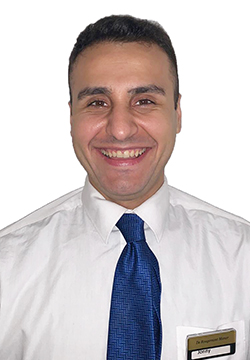 Jonny SáuescuNights Manager
The sociable guy with all the unsociable hours! Jonny is very active and enjoys everything from martial arts to body building, trampolining and tap dancing! Unfortunately due to a knee accident he has been (as he calls it) in ‘Grandpa mode’ for a while in order to recover. He is a confessed video game addict but aspires to write some fantasy novels one day (pre-orders available at reception). He is very knowledgeable and is keen to learn about other cultures and has set himself the challenge of learning as many languages as he can! If you’re struggling to sleep, get him to play you some classical guitar. 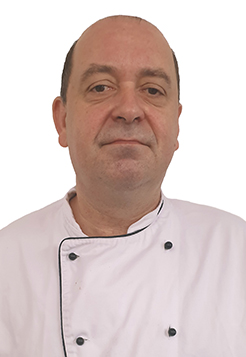 Andreas StummHead Chef
Andreas is originally from Erfurt, South Germany, but has now lived in the UK for over 20 years. He’s always had an interest in cooking and a passion for food, which really shows in his outstanding and inventive dishes! He started his chef-ing career in Berlin before coming to England and working in a boutique London hotel. After meeting his wife, originally from Portugal, they intended to move there one day – but now he works with us, we’re never letting him go! Andreas tells us his favourite food is seafood or steak, “simple dishes, cooked well”, so on his days off you can expect to find him going out for a meal to enjoy a night off of cooking! He also enjoys a good detective show on TV and spot of gardening; he grows a few of his own veggies, which likes to throw on the BBQ when they have guests round. 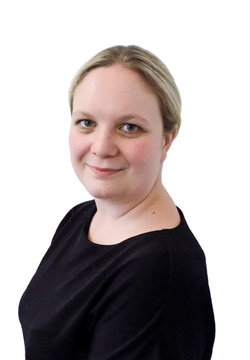 Naomi WilsonOperations & Events Manager
Naomi, our Operations & Events Manager – where do we start?! If you have ever visited the hotel you will most likely recognise her, not only because she is always floating around, but quite simply because she’s so important that she isn’t allowed to have any days off! After joining us at the age of 16, she says has been ’part of the furniture’ ever since. Here nearly all hours of the day and night, Naomi does also enjoy an experience day out with friends and family or visit to the gym. It’s worth also noting that she is easily bought with some homemade fudge! 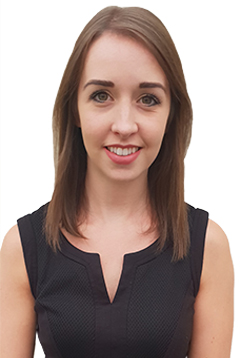 Alex CopleyMarketing Manager
Alex is our Marketing Manager, she’s here to make sure everyone knows about all the fabulous and fun things we do at De Rougemont! You’ll either find her running around grabbing photos at events or with her head down in the office trying to make sure everything gets done. When not working, Alex loves spending time with family & friends, teaching her Pole Fitness classes, wakeboarding or going to circus class – she thinks she spends roughly 50% of her time upside down and has been told that she must have been a bat in a previous life. 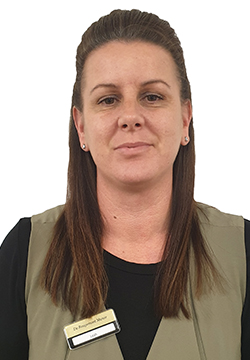 Leah TaylorHead of Housekeeping
Leah is our wonderful House Keeping (HK) Manager. She’s been part of our DRM family since 2009 and was appointed HK Manager in 2019, which Leah loves as she says she has a great team and she enjoys keeping the hotel spick and span! She lives in a “mad-house” with her fiancé and her 5 children and so when she gets a moment to herself she loves nothing better than sitting down to watch one of her favourite soaps; Hollyoaks, Holby City, Casualty or a even a cheeky bit of Love Island. She loves taking trips over to Cyprus to visit her Mum but one day wants to take the kids to Disney Florida. 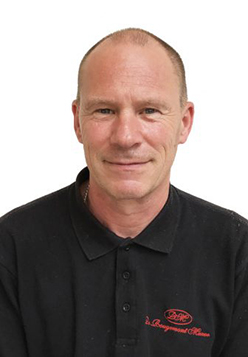 Bob TownsendGrounds and Maintenance Manager
If you’re ever in need of a little assistance – Bob is your guy. The DIY expert of the hotel, he has been our Head of Maintenance & Grounds since 2013. He’s called here, there and everywhere over the hotel so if you need to contact him, radio is the only way – he’s never in one place long enough to track down! If you want to fast track your job, he can be bought with a pint of cold lager but if you bought him a boat on the Norfolk broads he would love you a whole lot more. 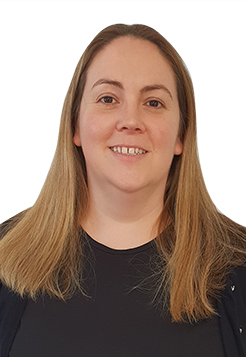 Lisa RawlesFinance Manager
Lisa is our super busy Finance Manager, she keeps us all in check here as well as running a home with three young daughters and two pet rabbits (which were for the children but now she has to look after those too!), we’re not sure how she manages it all! To relax, Lisa loves heading off on camping holidays or to their home-from-home in Devon for some family time, she adores her girls and loves spending time with them. Lisa dreams about going to Australia one day or back to America where she had her honeymoon and a trip to Disneyland is definitely on the cards! 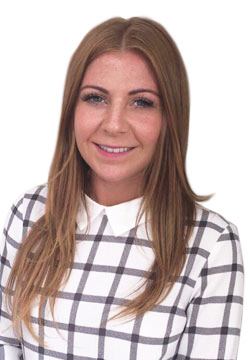 Lauren ThurstonHR Manager
Lauren is our HR Manager and we couldn’t run this place without her! Lauren has a background in senior revenues & recruitment, and works all hours of the day and night to ensure everything keeps running smoothly! When not at work, Lauren enjoys nothing more than a day with her partner and son or a night out with the girls. She joined us in 2009 and has never looked back!
Temporary Hotel Closure

We use cookies to ensure that we give you the best experience on our website. If you continue to use this site we will assume that you are happy with it.OKRead more